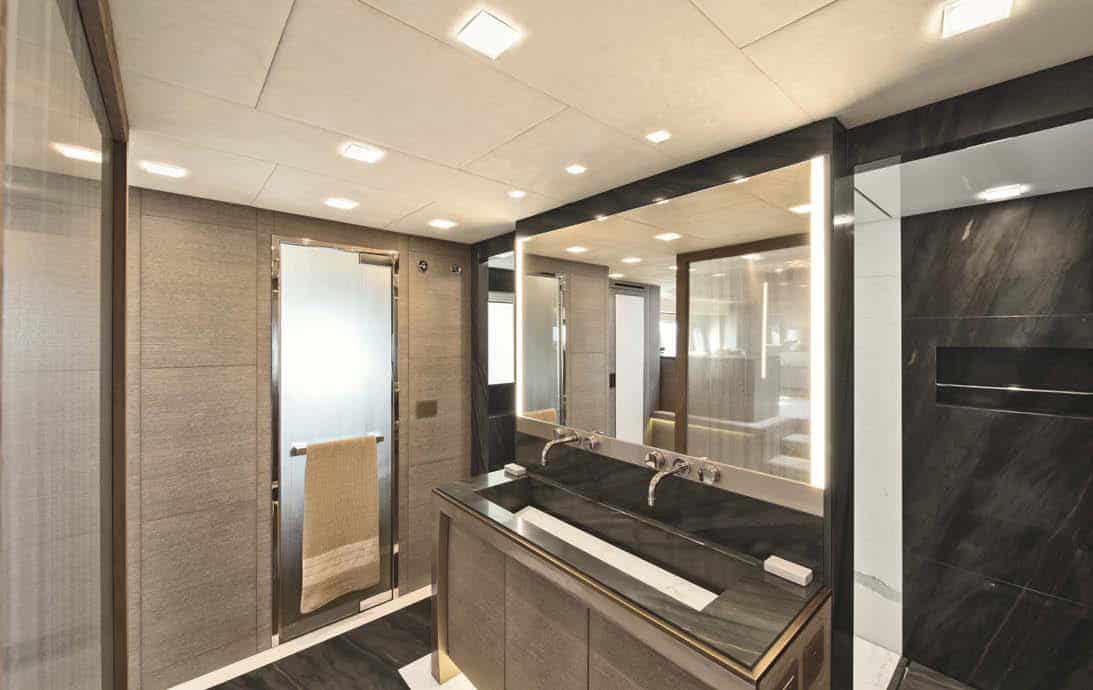 It has taken a mere ﬁve years for Monte Carlo Yachts take its rightful place amid the megayacht greats. In July 2010, the yard premiered its ﬁrst yacht, the MCY 76, in Venice, a model that opened the doors to international success. Five years later, Monte Carlo Yachts again chose Venice to unveil its new MCY 105 ﬂagship at a spectacular evening event in the Arsenale.
The 32-metre went on to cut a majestic swathe through both the Cannes and Monaco shows. “We kept our promise and our revenues have jumped from three million euro in our ﬁrst year to 58 million. We started out with a team of 20 and now we have 300 employees,” CEO Fabrizio Iarrera told us at the unveiling. “We want to keep going and we’re looking forward to the next ﬁve years with huge enthusiasm. In terms of the future, we’re considering the superyacht category which we feel is the natural evolution of the design and production course we’re already on.”
The work of Dan Lenard and Carlo Nuvolari who have been the design brains behind the Monte Carlo Yachts range since the outset, the new 105 has many of the MCY signatures: perfect balance between hull and superstructure, meticulously crafted proportions and intrinsically dynamic lines combined with bright interiors.
Featuring imposing bulwarks, a Portuguese deck and high, proud bow, the MCY 105 exudes an instantly recognisable elegance that is both effortlessly modern and absolutely timeless. “There is a leitmotif running through all the Monte Carlo Yachts models, a consistency on a stylistic and functional level,” comments Dan Lenard. “These aspects are all ampliﬁed in the 105’ design. Like the rest of the line, the hull forms have a ﬁsherman feel, particularly in the design of the bow, but here they have become a distinctive trait. This was the idea underpinning a design path that started from the whole concept of hull efﬁciency but was enriched by new stylistic and functional elements that became the yard’s styling cues.”
The interior layout sees the main deck devoted entirely to the owner and his guests with the master suite foremost and the rest of the deck taken up by the saloon. The galley is located on the lower deck nearby the crew quarters. Guest cabins account for the remainder of that level. Owners have a choice of either three or four with one or two VIPs or two twins. However, what really sets the décor of this yacht apart is the standard of its detailing.
“In the Monte Carlo Yachts 105, the details are very much of the kind normally the reserve of larger craft,” explains Valentina Zannier of the Nuvolari-Lenard studio which designed the décor and ﬁt-out. “Every single stick of furniture aboard this boat was individually designed. The style is contemporary but sophisticated.” Hardly surprising therefore that the textiles aboard are almost all by Hérmes and, unusually for a yacht, are matched with wallpaper featuring the same designs.
Other sublime touches include La Bretagna leather and suede. And wood, lots of wood, mostly in muted hues of grey. Bronze, Carrara marble (a favourite of the owner’s) and Elegant Brown, a dark stone by Antolini, also feature prominently. “Overall, we’ve created the atmosphere of a contemporary yacht that attention to detail has transformed into an authentic ﬂoating gem.”

Previous ArticleThis is the Advanced A80: a yacht with awesome light and a warm ambience
Next Article Euphoria 54: a yacht euphorically solid

This is the Advanced A80: a yacht with awesome light and a warm ambience

A megayacht born from experience