A new mith on the oceans: innovations and more for Perseus^3, the second 60-metre from Perini Navi

Perseus^3, the second megasailer to emerge from the Perini Navi 60-metre series, isn’t just a hugely innovative craft, she’s also a record-breaker thanks to her 2,602 square metre spinnaker which is the largest single sail ever made. Her achievements don’t stop there either. In total, she has an inventory of 10,000 square metres of sail, all made by Doyle Sailmakers. But there is more than just ﬁgures to this new Perini Navi, which bears the combined stamp of Ron Holland and the yard on its naval project and has interiors by the Franco Romani-headed Perini Group Technical and Design Ofﬁce.
She is, in fact, a compendium of new technical solutions and features in addition to offering the qualities only this legendary Italian yard, founded by Fabio Perini in 1983, can deliver. So huge is her inventory, in fact, that Perini’s technicians had to develop new captive reel winches and furlers for Perseus^3 to be capable of controlling all that sail on her 74.8-metre Future Fibres carbon mast. The result of their endeavours is captive winches with a maximum loading of 30 tonnes for headsails, line speeds that vary between 30 and 120 metres a minute and furlers capable of dealing with a 1804 square metre Code Zero.
However, Perini Navi’s technicians were loath to stop with even that great pile of innovations: they then converted the former ketch plans to a sloop as the ﬁrst 60-metre Seahawk was a two-master while Perseus^3’s owner wanted only a single mast. His idea is not merely to sail around the world with his family but also to compete in the big superyacht regattas. To allow him to do so both required a lot of work, including relocating the chainplates and the keel. This is also the ﬁrst time a Perini Navi has been given a twin rudder system and a 6-metre carbon bowsprit.
The deck plan was modiﬁed into the bargain with deeper walkways. Then, in another departure from Seahawk, the open cockpit forward of the mast was replaced by a pool which converts to a sail locker in racing. There are also two other lockers forward which house a pair of carbon Constellation tenders. Despite all this work, however, Perseus^3’s GRT is still below 500 tons. With such a massive rig and sail plan, safety is, naturally, one of the main priorities and so there are no less than 3000 sensors aboard, 200 of which are for the rig alone, monitoring the loads acting on the boat. The cockpit leads into the open-plan saloon which has a conversation/TV area and then, forward of the stairs, a lounge to port and dining area with stone table to starboard.
The latter comes from Rajasthan and was made using the same techniques as in the royal palace. The interiors have a distinctly marine feel yet are still very contemporary and comfortable. A “concrete” design implemented to perfection by Perini Navi’s craftsmen and with Franco Romani and his team’s skill in ﬂuidly developing both spaces and furnishings. The various areas seem to ﬂow from one to another in fact. The owner’s suite, located on the lower deck and featuring two bathrooms, has a sliding wall that can turn it into two separate staterooms.
Three double cabins (one with a bathtub) and a twin complete the guest area where it also has to be said Perini Navi’s technicians have done a masterful job of soundprooﬁng. In short, they’ve created an oasis of peace and tranquillity where guests can chill out whether they are sailing around the world or winding down in the wake of a regatta. Perseus^3, a supersailer that in terms of records, novelties and quality really is the ultimate Perini Navi creation. 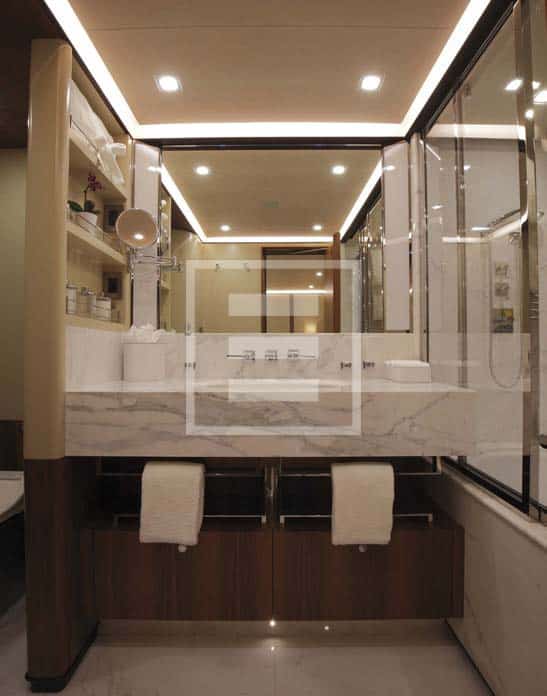 Previous ArticleA50 Aria: a yacht to suit the varying needs of the owner
Next Article The timeless and elegant Zafiro yacht from Benetti

A50 Aria: a yacht to suit the varying needs of the owner

A yacht from Mulder Design withy a huge beach lounge